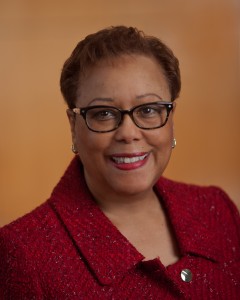 As a part of the STEM Education Coalition’s ongoing effort to interview leading federal and state policymakers on STEM issues of the day, we are proud to present the following interview with the President and CEO of the American Association of Colleges for Teacher Education, Sharon P. Robinson.

Q1: Can you tell us a little bit about the American Association of Colleges for Teacher Education and its members?

Robinson: As the premier voice on educator preparation, AACTE is dedicated to high-quality, evidence-based preparation that assures educators are ready to teach all learners on Day 1. We have over 800 member institutions including public and private colleges and universities in every state, the District of Columbia, the Virgin Islands, Puerto Rico, and Guam. We lead the field in advocacy and capacity building by promoting innovation and effective practices that are critical to reforming educator preparation. We also aim to accelerate meaningful improvement in educator preparation by promoting and supporting the adoption of high standards for evidence of program effectiveness, including data regarding PK-12 student outcomes; lead the charge to secure state and federal policy that advances high-quality student learning through educator preparation and development; and launch and sustain system-wide initiatives to promote the diversity of the professional community and to prepare educators who can serve diverse learners. Our newest initiative, the Innovation Exchange, supports university-based educator preparation programs in responding to the changing demands of the workforce and in preparing educators to meet the needs of PK-12 learners through four interdependent components: pedagogy, workforce development, capacity building, and documentation and synthesizing research. We continually seek new ways to advance implementation of high-quality learning practices.

Q2: The Obama Administration has talked a lot about the need for an “All Hands on Deck Approach” to recruit our best students into careers in math and science teaching. How have your members responded?

Robinson: AACTE members work to recruit the best and brightest students into the teaching profession overall. In particular, programs have focused recruitment efforts on underrepresented minorities and on candidates for high-need areas, including math and science. Notably, Freeman Hrabowski, president of the University of Maryland, Baltimore County (an AACTE member institution), has led a very successful university-wide effort to open STEM career opportunities to underrepresented populations of students. He chaired the National Academies’ committee that produced the recent report Expanding Underrepresented Minority Participation: America’s Science and Technology Talent at the Crossroads. He also was recently named by President Obama to chair the newly created President’s Advisory Commission on Educational Excellence for African Americans.

In addition, AACTE members are eager participants in the Teacher Quality Partnership (TQP) initiative of the U.S. Department of Education. This summer, President Obama announced a STEM focus for the most recent round of TQP grants, and AACTE members jumped at the opportunity. Under this program,

teacher preparation programs use federal funding to develop master’s-level teaching residency programs or to reform undergraduate preservice preparation programs. One key lesson we have learned is that the preparation of effective teachers for high-need schools and subject areas requires strong partnerships with STEM disciplines. One AACTE member institution, the University of Colorado at Boulder, offers the CU Teach Program, which brings together the college of arts and sciences, the college of engineering, and the school of education to increase both the number and the quality of middle and high school math and science teachers. (This and other successful STEM efforts are catalogued in our online Innovations Inventory.) Most importantly, we have learned that these partnerships succeed when instruction in the discipline is accomplished through high-quality pedagogy These efforts suggests in very strong terms that quality teaching in STEM inspires others to become STEM teachers.

Q3: How has the adoption of Common Core Math and Next Generation Science Standards impacted your members and educators in general?

Robinson: Higher education faculty played a significant role in the development of the Common Core State Standards as well as the Next Generation Science Standards, thus strengthening the PK-12 and higher education alliance. Educators in both sectors are thinking about student achievement in these disciplines as defined by the new standards. We believe the standards call for deep knowledge within the disciplines and are clearer and more rigorous than what many states have been using. The middle school science standards require a curriculum that is integrated rather than discipline specific. This is not how most of us learned in the sciences, but it is how science impacts our lives – as an integrated product or idea that answers a question. Teacher preparation faculty are collaborating with their partners in colleges of arts and sciences and in PK-12 to strengthen beginning teachers’ ability to teach science and math as competent users of the discipline.

AACTE members and other institutions of higher education continue to play a significant role in the implementation of college- and career-ready standards and assessments. Our state chapter leaders are playing an important advocacy role to support the adoption and implementation of the standards. Chapter leaders in Kansas and Wisconsin, for example, testified to the state legislature on behalf of the new standards. Our members and chapters often provide or lead professional development events within their districts and states to ensure that all current and future educators have the learning opportunities to make the necessary changes in their classrooms and to ensure future educators have the necessary skills to teach the new standards. For example, the Arkansas Association of Colleges for Teacher Education has worked with its Department of Education to host statewide training on the standards.

Robinson: AACTE supports the reauthorization of the Higher Education Act (HEA). AACTE would like to see provisions included from H.R. 2172/S. 1062, “The Educator Preparation Reform Act,” which improves the Teacher Quality Partnership (TQP) grant program including opening up TQP to principal residencies and to development of other educators needed by school districts, such as librarians, literacy specialists,

and school counselors. The bill also reforms the TEACH grants, which provide tuition support for teacher candidates, to target student eligibility to those in the latter half of their preparation at the undergraduate level or those in post-baccalaureate or graduate programs. H.R. 2172/S. 1062 also strengthens accountability for preparation programs to require them to report meaningful performance data to the public. The bill also establishes a fair process for encouraging states to deal with low-performing programs by requiring states to provide technical assistance to such programs as determined by state-developed criteria, to close programs that fail to improve after technical assistance, and to report programs that have been closed.

Of critical importance to AACTE are the pending teacher preparation program regulations, expected at any moment from OMB for public comment. As you may recall, Congress last reauthorized HEA in 2008. In 2012, 4 years after HEA was signed into law, the Department of Education initiated negotiated rule making on the Title II provisions—the title that focuses on teacher preparation. The negotiated rule-making process did not reach consensus. In April 2014, the Department of Education transmitted proposed regulations to OMB. Since then, key players in the PK-12 and higher education communities, including AACTE, have met with OMB to discuss concerns around the proposed regulations as we last saw them in 2012. While we do not know what the current proposal looks like, the regulations could require states to develop high-stakes ratings of teacher preparation programs and tie student eligibility for federal financial aid to self-reported and unreliable qualitative measures. In addition, the proposed regulations could impose burdensome data collection and reporting requirements for institutions of higher education and states. AACTE sees clearly a connection between the teacher preparation program ratings (in the 2012 negotiated rule-making regulations) and the pending rating system for colleges and universities.

AACTE’s policy priorities also include maintaining pre-sequestration funding levels for education preparation programs such as these:

• Transition to Teaching program at $27 million (Title II, Part C, Chapter B of the Elementary and Secondary Education Act)

• Math and Science Partnerships at $149 million (Title II, Part B of the Elementary and Secondary Education Act)

Q5: The Congress is gearing up for reauthorization of the Higher Education Act. What are the main issues you see as this process unfolds?

Robinson: We are pleased that there is action in both the U.S. House of Representatives and the U.S. Senate on reauthorizing the Higher Education Act (HEA), and we fully understand that this action is just the beginning of a long process. AACTE is keeping a watchful eye on Title II for the reasons mentioned previously, and we remain hopeful that provisions of “The Educator Preparation Reform Act” are included in the versions of HEA on which the House and Senate work. It is vital that the Teacher Quality Partnerships remain in HEA, and we look forward to working on ensuring that valid, reliable, and useful data are required of our teacher preparation programs.

In addition, we are watching the elections this year. With so many members of Congress retiring and the possibility of new leadership in the Senate, the path of HEA in the 114th Congress is yet to be revealed. We are fully committed to working with members of Congress on the reauthorization moving forward.