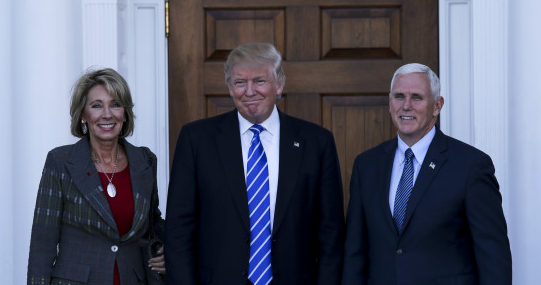 This week, the U.S. Senate will begin the confirmation hearing for Betsy DeVos. Mrs. DeVos was nominated by President-Elect Donald Trump for Secretary of Education. The STEM Education Coalition hopes senators will raise the following questions with Mrs. DeVos:

Q:  In today’s economy every student needs to have a strong foundation in the STEM subjects in order to land and succeed in virtually any job – from the shop floor to the research lab to the boardroom.   Further, the best, most highly paying jobs are nearly all in the STEM fields.  If we are going to enable our students to compete in the global economy we must maintain a strong federal commitment to improve teaching and learning in the STEM fields.  What is your view on the best role the Department of Education can play in supporting improvements in STEM education at the state and local level in K-12, in Out-of-School time, Career and Technical Education, and in Higher Education?

Q:  One consistent concern we hear from business leaders is the lack of qualified STEM workers.   Please describe how you, as the leader of the Department of Education, plan to work with business and industry leaders to identify key education and workforce issues and use federal resources to empower state and local education leaders and their communities, as well as public universities, with the resources they need to promote STEM as a priority and to drive change.

Q:  In the Department of Education’s Fiscal Year 2018 budget, do you intend to provide full funding at the Congressionally authorized level of $1.65 billion for the ESSA Student Support and Academic Enrichment Grants Program (SSAEG, Title IV, Part A), which would provide every state and district with needs-based funding that can be used at their discretion to support STEM-related learning activities?

Q:  How is the Department of Education during the Trump Administration specifically preparing to support STEM education for historically underrepresented minorities, especially those in economically and educationally disadvantaged rural and urban communities? How did you personally support these students through your foundations?

Q:  What provisions do you endorse in the use of federal (e.g. Title II ) funding — should it be left entirely to states?  Should states be allowed to use it to support programs from higher ed that advance K12 teacher professional development?

Q:  What role do you see for regional and disciplinary-based accreditation in  higher education?

Q:  How is the Department of Education during the Trump Administration preparing to continue the current Administration’s “Educate to Innovate” $700M campaign?

Q:  During the campaign, the President-Elect said “Common Core is a total disaster. We can’t let it continue.”  The adoption of standards is a state decision, but some felt that in the previous administration the Department of Education influenced those decisions by linking Race to the Top funding to a state’s standards.  As Secretary of Education, how would you balance addressing the President-Elect’s stated view while respecting the rights of states to make their own decisions about adoption of academic content standards?